In Life and in Archery

In strategy, in life, and in archery, the order of operations is important.

Ready – preparing, steadying and grounding yourself.

Aim – strategically thinking and taking aim at the intended goal or objective.

When this order isn’t followed or one of the steps is missed, things often go wrong. For example, if a leader takes an ‘aim, fire… ready’ approach – where they strategise and then implement, they may neglect to connect to their team’s feelings or preparedness. After finding that they are not getting the results they expected, they may retrace their steps to check the more human aspects of the situation, only to discover that the team did not feel prepared or considered in the process.

By not taking human emotions and reactions into account when planning strategy, unintended consequences can derail initiatives. But when you integrate and align thinking, feeling and gut instinct, you gain an advantage in leadership, decision-making and execution, as well as in personal alignment and fulfilment.


The Centers of Expression

The Centers of Expression reflect how individuals predominantly experience and show up in the world and what they reveal to others. This includes which of their Centers is expressed clearly as their primary strategy, and which are less expressed or potentially neglected. Some people connect to their emotions first and foremost, where others are more connected to their thoughts or to their gut instincts. 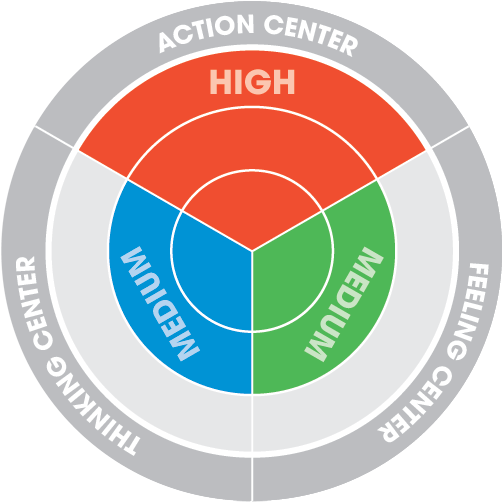 Action-first individuals are likely to be more focused, fast-acting, and impulsive. They engage with the world in an active, energised way and may be described as people who make things happen, who are determined, or even bold and brave. They are often tuned into their instincts and intuition, somehow ‘knowing’ what is happening or what needs to happen without necessarily being able to explain how they know. They are quite aware of their environment and good at picking up on opportunities to change, or seeing how to move a situation forward. 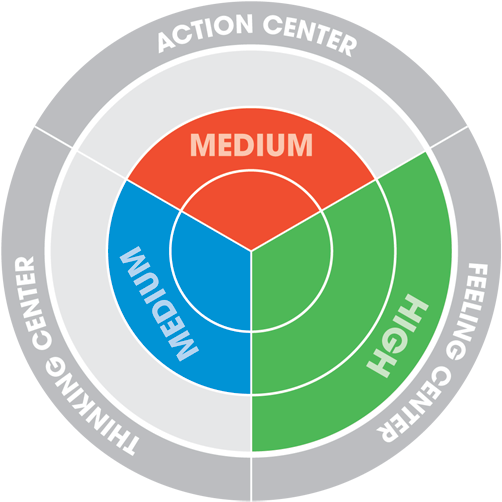 Feeling-first individuals tend to be more empathic, relational, and aware of feelings. They are often emotionally intelligent, self-aware and conscious of connections and relationships with others in both personal and professional life. Their style is likely to be collaborative and consultative and they prefer working in an inclusive way to understand the challenge. This approach is often effective in building strong relationships within a team or workgroup. 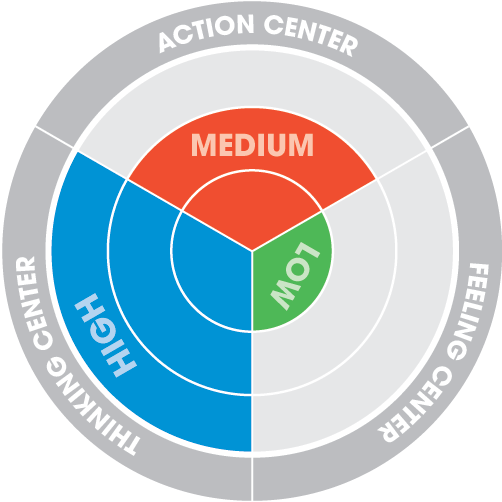 Thinking-first individuals are more rational, cerebral, and analytical. They show up in the world as strategic planners who are able to see things clearly and move from insights to action without being distracted by subjective emotions. They are likely to analyse issues, generating a number of possible actions or ideas, and assessing ideas based on a solid understanding of the facts.

Understanding the Concept of ‘Stacking’

While we each have all three Centers available to us, we give them different priorities. We describe this as a ranked or ‘stacked’ order in which a person is likely to access their thinking, feeling and action Centers.

Centers of Expression preference for the 9 Enneagram Types

The Centers of Expression cut across the Nine Enneagram Types, although there are some more and less common patterns in how the Types express the Centers. Just because a person’s Type falls into a particular Center of Structure, it does not determine the primary Center they express.

The iEQ9 measures the Centers of Expression independently, rather than measuring Type and making assumptions about Centers.

The table below illustrates the average Action, Feeling and Thinking Centers of Expression we have found across the nine Enneagram Types, based on a significant sample of iEQ9 users.

Patterns of preferences for the different Centers of Expression

Notice that while some types show a Center preference that aligns to their Center of Structure (for example, the Enneagram 8 in Action and Enneagram 5 in Thinking) this data shows that this is not a fixed pattern. The Enneagram 9, for example, demonstrates their conflicted relationship with Action by often suppressing this Center, resulting in this being the lowest-ranked of the three Centers of Expression for the Enneagram 9.


How do these stacked Centers play out?

Each of these combinations of Thinking, Feeling and Action preferences result in characteristic profiles or ways of engaging. These are described below.

This profile tends to be intuitive and impulsive, connected to what needs to be done and engaging with the world in an active, energised way. Tuned into their instincts and intuition, they often somehow ‘know’ what is happening or what needs to happen without necessarily being able to explain how they know. They are quite aware of the environment, picking up on subtle currents of emotion, relationships and stakeholder needs. While they are aware of feelings - both their own and others – they may prefer to act quickly on those feelings rather than to dwell on them for very long. They are very quick to act or respond to stakeholders’ needs but may short-change reflection and planning for the future. This can lead to reactive responses, moving from challenge to solution very quickly in a seemingly impulsive or non-strategic manner.

These action-oriented individuals are likely to be quite aware of the environment they operate in and particularly the gaps or potential to make things better or to move things forward. In a grounded and healthy state, this drive is balanced by an ability to step back and consider the facts and options before moving into action. In a less-healthy state, this can be reversed – they might move quickly into impulsive action, get mixed or poor results and only then pause to think – meaning that thinking is focused on looking back at what went wrong. Others might struggle to keep up with this fast pace and feel excluded as a result. Emotions might be ignored during decision-making and this can seem task-oriented or even unfeeling.

This classic sequence combines emotionally intelligent, self-aware decision-making with collaboration and consultation, preferring to think through challenges with others rather than act as a lone wolf. This profile may be quite intellectual and take time to make decisions, asking lots of questions about the perspectives of various stakeholders and looking for deep insights first. They like to work with others in an inclusive way to understand the challenge and build strong relationships. While they are able to know and see a lot about a situation, this might actually prevent them from moving into action. Too much information and too many diverse perspectives can make it difficult to know what to do next.

Open-hearted and responsive to the feelings and needs of others, this profile intuitively knows what someone needs and can be a great support to others, taking on the role of coach or facilitator and helping others to take action on their challenges. With a strong connection to feelings and gut instinct, they may be seen as a deeply intuitive person, able to know what to say to make others feel better. While emotionally aware, they are likely to prefer to act on feelings, giving feedback to others or doing something to address the feeling rather than spending a lot of time on analysis. They may move from feelings to response quickly, without connecting to facts or objective reality, and others may experience this as reactive.

These thoughtful individuals excel at seeing the different sides of an issue, including diverse stakeholder perspectives, and generate a lot of ideas and options in response. This is based on understanding both the facts and ‘people’ implications of an issue, making them powerful systemic thinkers. Broad scanning brings a lot of data into their decisions, which may create a risk of ‘analysis paralysis’ or procrastinating and delaying action in favour of more thinking. This is often an unconscious attempt to control the complex and uncertain world by collecting more information, assessing more risks or consulting more stakeholders. However, in the process, they may miss the opportunity to test their thinking in the real world. They may feel overwhelmed by the number of ideas, possibilities and perspectives, finding it very difficult to synthesise these and move to clear and decisive action.

This profile is often appreciated in corporate environments, because they show up as rational strategic planners, seeing things clearly and moving from insights to action without being distracted by subjective emotion. They think through different aspects of an issue, generate possible actions or ideas, and assess those ideas based on a solid understanding of the facts and practicalities. This leads to them making things happen. However, with feeling-last, they may neglect the importance of emotions – both their own and those of various stakeholders, colleagues or customers. As a result, they may often experience strong resistance and feel surprised that others do not always appreciate their efforts to create change. When resistance arises, they might explain why the action makes sense, rather than truly listening to the concerns or ideas of others.


Balancing the Centers of Expression

There is no ‘best’ stack of the Centers of Expression – all the possible combinations of dominant, secondary and neglected Centers have their own gifts and potential challenges or stumbling blocks. In general, the path to development is to focus on achieving more balance among the Centers of Expression. We do this by moderating the expression of our dominant Center if it is over-expressed, and checking that it is intelligently expressed; adjusting our secondary Center to ensure it is conscious and healthy; and compassionately accessing and connecting to our under-expressed or neglected Center, to give it a voice.